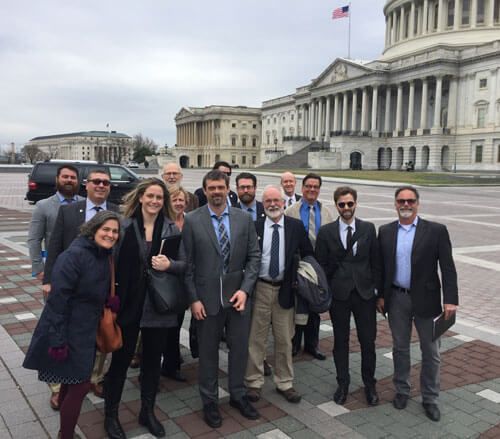 I just returned from an epic week in DC where 17 ECSGA members teamed up with a dozen growers from the PCSGA to educate our elected representatives about our priorities. Combined we hit nearly 100 congressional offices and agencies, carrying an optimistic message of increasing production, sustainable seafood, and jobs and economic development in rural coastal towns across the country.

This was our 13th year doing this important work, and we have established valuable relationships in many key offices. Many senators and representatives know our issues before we even go in the door. Unfortunately, many of our issues remain the same year after year. For instance, we always request that appropriators hold the line on the budget items we care about, such as funding for: Sea Grant, the NMFS Aquaculture Program, the Saltonstall-Kennedy grant program, the Sea Grant Marine Aquaculture Research program, Ocean Acidification research and the Regional Aquaculture Centers.

This year we raised a few new topics to discuss. We are seeking a tweak to the Merchant Marine Act that would exclude aquaculture workers from the definition of “seamen,” which would save our members thousands on their employee liability insurance. A bill was submitted on our behalf by Rep. Sanford (R-SC). The Shellfish Aquaculture Improvement Act (HR-5061) would achieve this simple one-line fix. Right now we are collecting co-sponsors and hope to have a companion bill in the senate soon. You can help by calling your congressional representatives and encouraging them to get on board.

We are also seeking a change in the Farm Bill that would tweak the available crop insurance programs so that we can actually utilize them on our farms. As with terrestrial farming, our crops are vulnerable to disease, storms, predators, and all kinds of bad weather. While many of us have learned this the hard way, an affordable and effective crop insurance program (similar to some of those available for row crops) would go a long way towards helping growers weather a major loss.

For the past seven years we have been barred from selling shellfish to the European Union because of a dispute, initiated by our FDA, about shellfish sanitation standards. After years of dithering, we asked the FDA to attempt to break the logjam by suggesting a baby step forward to restart the delicate negotiations: allow shellfish imports from EU “Class A” pristine waters. Our inspectors audited the EU sanitation programs and their inspectors looked at ours, and they agreed that the compromise was workable. A little over two years ago we were told that all that remained was to have the rule change listed in the Federal Register. It appears that this is more challenging than we thought because we have seen no movement in years. We tried congressional pressure, letters, hearings – all to no avail. Just this week we received word that we will see “significant action within the next two weeks.” I can hardly wait.

The limited agreement was just a baby step. Initially only two states (MA and WA) will be allowed to ship to the EU, and only two EU nations (Netherlands and Spain) will be allowed to ship to the US. We have assurances from the FDA that since both U.S. and EU sanitation programs affect member states uniform nationally, other U.S states and EU nations should be able to be added “quickly.”

Apparently, the negotiators felt that making an agreement that included all U.S. states and EU countries was simply too daunting. As a result, ECSGA members who are not from MA hate the deal because it gives those growers an unfair advantage in establishing markets. This is true, but I believe that this approach has cracked open a door that was essentially locked for seven years, and a little patience could soon pay off for the rest of us. I didn’t pick the states, so don’t hate on me. Of course, the EU will have to amend their regulations as well, and they are not exactly known as exemplars of bureaucratic efficiency. I have little faith that this will run smoothly or quickly.

I have seen oysters in European restaurants at eye-popping prices, and we know they love our shellfish, so hopefully the market will be lucrative enough to support the expense of shipping live rocks across the “big pond.” If we are going to keep ramping up production at double-digit rates we will need to find new markets to avoid a price collapse. I see European markets as a key to our future growth.

As we’ve done most every year we (with the PCSGA) held a well-attended reception with the Wine Caucus and the Shellfish Caucus where we shucked a couple of thousand oysters for an eager crowd of representatives and top staffers. It is always a fun event that allows us to cement the valuable relationships we have developed over the years.

For all those who have never been to our Walk the Hill festivities, please take a minute to thank our members who took precious time away from their real jobs to do this important work. We try to get one member from each state, and next year we will need to get some folks from NH, GA, SC and FL so we can engage with key congressional offices in those states.

This year we were guided by our lobbyist, Matt Mullin of High Street Strategies. Matt has been working with us for nearly a year now and his knowledge of the inner workings of Washington has proven invaluable in getting our bill submitted and seeing that our issues don’t get buried by the flood of other issues that every office struggles with in DC. Those of you who may have questioned the value of our hiring a lobbyist can rest assured that Matt’s hard work has played a huge role in our success.