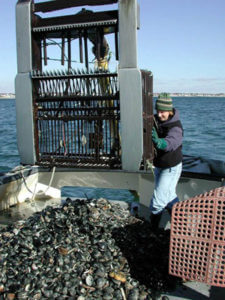 Listed below are links to several articles describing the environmental impacts of mechanical harvest methods, or “dredging” in shellfish aquaculture.  The issue of dredging on fishing activity in general is quite inflammatory, and a great deal has been published on wild-harvest trawling impacts.  One author compared the impacts of trawling with those of clear-cutting (Baulch 1999), stating that “trawling gear devastates the world’s continental shelves.”  Others describe “Watery Wastelands” devastated by trawling (Levy 1998).

But in reality, the situation is more nuanced and requires an understanding of the various environments and different types of gear, and how they interact.  It is important to understand that the impacts of huge heavy trawls operated in deep waters to capture wild fish or shellfish simply do not apply to the operation of small dredges used inshore to harvest cultured shellfish on leased bottom.

Many reports and reviews have claimed little or no significant trawling impacts, while others cite devastation and destruction.  Some consider trawling to physically disrupt the bottom and harm the benthic community by increasing sedimentation and predation exposure, and reducing benthic primary production (Auster and Langton 1998, Bradstock and Gordon 1983, Brown 1989, Collie et al. 1997, and Engel and Kvitek 1998).  Conversely, others believe that trawling may mimic natural disturbances and stimulate benthic production, thereby enhancing fish production (DeAlteris 2000, MacKenzie 1982, Van Dolah et al. 1991, and Currie and Parry 1996).

The following review articles addressing the impacts of mechanical shellfish harvest are worthy of special mention:

From NOAA, the most complete and recent review of literature pertaining to the impacts of mechanical harvest.  The researchers also conducted a before-and-after-controlled experiment to look at biodiversity and benthic recovery on Connecticut clam beds. This study found modest increases in clam recruitment following hydraulic dredging:
Review of the Ecological Effects of Dredging in the Cultivation and Harvest of Molluscan Shellfish
by NOAA research scientists Ron Goldberg and Renee Mercado-Allen of the Milford Lab, 2011.

1995 literature review by Dr. Loren Coen in South Carolina:
A Review of Potential Impacts of Mechanical Harvest on Subtidal and Intertidal Shellfish Resources