Petition to List the Eastern Oyster as an Endangered Species 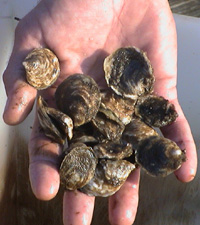 Even though this petition is old news, it serves as a good illustration of how hard work and effective organization by the ECSGA and other stakeholders prevented devastating regulations from being enacted.  Had efforts to list the Eastern oyster as endangered been successful, interstate trade in oysters would be next to impossible today.

In mid-November 2005, the National Marine Fisheries Service (NMFS) announced that it had accepted the request of the petitioner to withdraw his petition to list the American oyster as threatened or endangered under provisions of the Endangered Species Act (ESA).  In the Federal Register notice NMFS said it would cease evaluating the petition, but would complete the status review report that was well on its way to completion.

NMFS wrote that the status review report "will be the most timely and comprehensive resource document for this species" and "will be a useful tool in guiding future management decisions."

The ECSGA, along with the Gulf Oyster Industry Council and the Pacific Coast Shellfish Growers Association, worked hard to pressure NMFS to deny the ESA listing.  In addition to an active letter-writing campaign, and submitting our written comments, we worked with the National Fisheries Institute and the House Resources Oversight Committee, which listened to our testimony at a hearing it convened on this issue.

In the petitioner's request to withdraw the petition he noted that there were "significant concerns of some that the species may be listed as endangered, thereby creating severe restrictions and regulations for this resource."  This was one of the primary arguments we made against the listing, and apparently we were heard.

Although the ESA listing is moot now, we learned a lot from the whole experience. We learned how to lobby effectively and how to galvanize the membership on important issues. Some members felt that this whole ordeal was absurd and that the listing could never have happened, but the way the endangered species act is written, it was entirely possible that NOAA could have looked at this and reached a different conclusion had we not taken an active role in providing evidence to sway them in the other direction.

We also learned that the Endangered Species Act is flawed, in that when an invertebrate species is listed, it must be listed for the entire range of that species, unlike the case for vertebrates, where isolated populations can be listed.

More background on the ECSGA trip to Washington, DC in 2005 to protest the ESA listing.