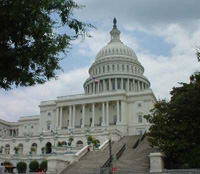 Every year the ECSGA board sets legislative priorities that inform the association's lobbying efforts.  Some time during the first quarter, a dozen or more of our members — often joining forces with counterparts from the Pacific Coast Shellfish Growers Association (PCSGA) — travel to Washington, D.C., to educate their elected representatives on these and other issues.

You can read about the most recent Walk-the-Hill trip in this April 2018 newsletter piece.

Read a summary of the background of the European Union shellfish trade embargo with updates here and here.

To see the ECSGA's current and past legislative priorities, follow the links:

Walk on the Hill Report

You can read about the most recent Walk-the-Hill trip in this June 2019 newsletter piece.