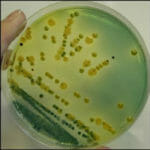 Vibrio bacteria occur naturally in many marine environments, BUT they are not related to pollution.  Although most Vibrios are benign, two species, Vibrio parahaemolyticus (V.p.) and Vibrio vulnificus (V.v.) have been associated with human illness.  According to the latest statistics, less than one percent of food-borne illness is related to Vibrio, while the vast majority are associated with vegetable, chicken and meat products.

Brochures for Consumers, Harvesters and Shippers on Keeping Shellfish Safe

The Truth About Flesh-Eating Bacteria

Don't believe everything you read in popular media outlets. Those sensational stories get a lot wrong. 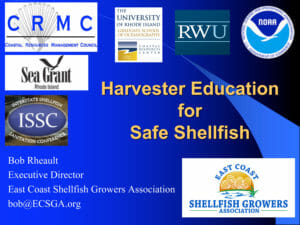 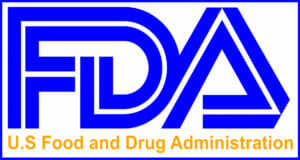 NSSP Guide for the Control of Molluscan Shellfish

The National Shellfish Sanitation Program (NSSP) is the federal/state cooperative program recognized by the U. S. Food and Drug Administration (FDA) and the Interstate Shellfish Sanitation Conference (ISSC) for the sanitary control of shellfish produced and sold for human consumption. The purpose of the NSSP is to promote and improve the sanitation of shellfish (oysters, clams, mussels and scallops) moving in interstate commerce through federal/state cooperation and uniformity of state shellfish programs.  Under international agreements with FDA, foreign governments also participate in the NSSP.  Other components of the NSSP include program guidelines, state growing area classification and dealer certification programs, and FDA evaluation of state program elements. 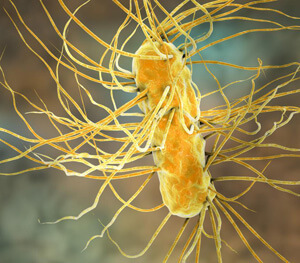 It's human nature to blame the last thing you ate for a foodborne illness, but if symptoms appear within a few hours of ingesting oysters, the odds are good that some other meal (or contact with an infected person) was more likely the cause. The most common source of foodborne (and human contact) gastrointestinal illness is Norovirus - and it has an incubation period of almost two days before onset of symptoms. This article describes average times of symptom onset for various pathogens.

In order of increasing incubation times:

Campylobacter and Shiga-toxin-producing Escherichia coli had the longest incubation times among bacteria (62–87 hours);

Hepatovirus A, which causes hepatitis A, had the longest overall incubation period of any pathogen studied (672 hours or 28 days).

This 5-minute video shows how Dr. Rachel Noble and her team at the University of North Carolina at Chapel Hill aim to revolutionize early detection and alert systems for contaminated seafood and ocean waters.  Easy-to-use kits will identify harmful bacteria in water and shellfish in only two hours (vs. the current 24 hours), significantly benefiting North Carolina's tourism and seafood industries. 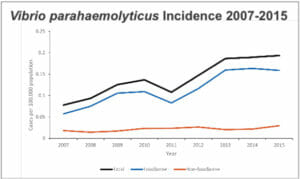 This article by Bob Rheault describes what went on at a September 2017 V.p. workshop focused on reviewing recent research and control plans. 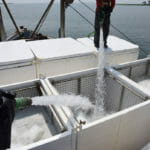 This article by Andy dePaola that ran in our June 2017 newsletter describes how the numbers of Vp illnesses linked exclusively to shellfish in the Northeast declined after rapid-cooling controls on oyster harvesting began in 2014.

Toxic Bacteria On The Rise In Shellfish: Will The Raw Bar Make You Sick?

An opinion piece by Katherine Gustafson from Forbes.com.

In May 2016 the Center for Science in the Public Interest (CSPI), sued the Food and Drug Administration (FDA) in federal court to force the agency to regulate Vibrio vulnificus  (Vv) in shellfish harvested in Gulf Coast waters and sold for raw consumption.  ECSGA Executive Director Bob Rheault offered his take at that time on the CSPI’s efforts to regulate consumers' access to raw shellfish.

But in November 2016 the FDA denied CSPI's petition, stating that both shellfish growers and the agency had made significant progress on reducing illnesses and deaths stemming from Vv.

Rheault commented on the decision in an article by Christine Blank for SeafoodSource.com.