from an editorial in the August 2017 ECSGA Newsletter,
by Executive Director Robert B. Rheault 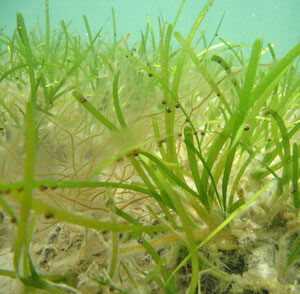 Sixteen years ago I presented a controversial paper at an aquaculture conference titled, Eelgrass is Great, but Shellfish Aquaculture is Better. I have nothing against eelgrass (Zostera spp.), but for decades we have seen it used as a tool to block aquaculture development, and I believe that logic is flawed. For decades eelgrass protection efforts have stymied shellfish culture projects around the country, most recently threatening to shutter a 65-year-old farm in Humboldt Bay, Calif. (If you want to become enraged check out this article in the American Spectator)

Everyone loves eelgrass because of the ecosystem services it provides. Submerged aquatic vegetation (SAV) is even protected in federal law because it serves as essential fish habitat and provides prime nursery grounds for dozens of species of fish and invertebrates. Some of the other ecosystem services attributed to eelgrass include coastal protection and sediment stabilization, providing food, enhancing nitrogen uptake and improving water quality. According to the 2016 research paper, Seagrass Ecosystem Services and Their Variability Across Genera and Geographical Regions by Lina Mtwana Nordlund et al., hundreds of researchers globally have produced more than 5500 publications on sea grasses (3000 on Zostera alone) and many scientists have made careers of studying SAV. I don’t dispute any of this, but I contend that all the reasons why we love eelgrass apply equally to shellfish aquaculture, which provides similar ecosystem services.

Our animals filter the water, improving clarity and removing nitrogen, mitigating the symptoms of eutrophication. Our gear (and the shellfish inside) provide wonderful habitat for dozens of varieties of juvenile fish and invertebrates, who love the structure and all the hiding spots as well as all the food they glean from fouling organisms. A study on my farm compared the populations associated with oyster cages to those in a nearby eelgrass bed and found 10 to 10,000 times as many critters in the oyster cages. Another Rhode Island study revealed that for rocky-reef-associated species, the habitat value of oyster cages was at least as good as restored and natural rocky-reef habitat nearby.

Oyster farmers in Humboldt Bay are under fire from hunters who claim that the oyster farms will cause a 3-percent decline in eelgrass coverage, which will in turn result in unacceptable declines in the population of Pacific black brant geese, which forage for eelgrass during their migration between Mexico and the far North. This has the hunters up in arms against the farm, despite several studies showing that forage opportunities for waterfowl around farms are often enhanced.

I recommend regulating based on the ecosystem services of the proposed project. If an oyster farm is going to displace some eelgrass, chances are that from an ecosystem viewpoint this is not a bad thing. If we can get the regulatory agencies to acknowledge that there is habitat equivalence in the value of eelgrass and shellfish farming, then sustainable seafood production can develop in harmony with nature. I believe we have to find a way to get there, and I will continue to push this rock up the hill. You don’t get to be a shellfish farmer without demonstrating extraordinary persistence.