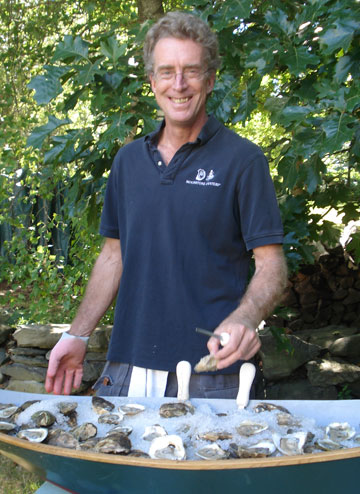 Bob "Skid" Rheault started Moonstone Oysters in Narragansett, RI in 1986.  He has a Ph.D. in Biological Oceanography and is an adjunct professor in the Department of Fisheries, Aquaculture and Veterinary Science at URI.  He served as ECSGA President for five years before he sold his farm and took on the Executive Director position in 2008.

Bob is a passionate industry advocate, carrying the message of sustainable seafood and economic development to our elected representatives and agency leaders in Washington, D.C.  He is also active at the Interstate Shellfish Sanitation Conference (ISSC), where he has been effective in pushing for workable regulations.  His educational efforts on Vibrio management issues have earned him the moniker, "the Vibrio Evangelist."

Bob's research interests include documenting and assigning value to the environmental services provided by shellfish aquaculture, and implementing nutrient-credit trading as a means to mitigate coastal eutrophication.  He holds a design patent for a novel  floating upweller design and is a recipient of the National Shellfisheries Association's Wallace Award.