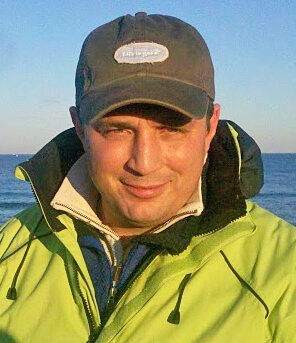 Chris began farming oysters full-time in 2013 when he started Chadwick Creek Oysters and Seed Nursery in Pamlico County, N.C. In 2019, he founded Siren’s Cove Shellfish, a second oyster farm and shellfish dealership in Carteret County. Chadwick Creek’s seed nursery has supported the growth of North Carolina’s booming shellfish industry from about eight growers in 2013 to more than 70 today. Chris has advised many new growers as they set up their farms.

In 2018, he took the reins of the North Carolina Shellfish Growers Association and has reorganized it as a trade association with regional board representation and a tiered membership structure. Soon after that reorganization, Hurricane Florence devastated the state’s shellfish industry, and Chris led the effort to get meaningful hurricane relief for North Carolina’s oyster growers from the state Department of Agriculture.

He was also the industry voice for North Carolina’s Shellfish Aquaculture Bill, which passed unanimously in 2019 in the state’s House and Senate. In March 2020 Chris was appointed to the state's  Shellfish Cultivation Lease Review Committee, which hears appeals of the Marine Fisheries Commission's decisions regarding shellfish leases.

Before oyster farming, Chris worked in the hedge-fund and technology industries. He graduated from the University of Pennsylvania with a B.A. in International Relations, and is also a graduate of Phillips Exeter Academy. Chris grew up on a small farm in the Hudson Valley, located in upstate New York, where the farm-to-table movement has been robust since the 1960s. From an early age, Chris loved shellfish and spending time on the water.