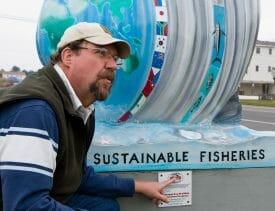 Gef Flimlin was a Marine Extension Agent/Associate Professor for 38 years, working with the commercial fishing and aquaculture industries in New Jersey.  He has been involved in numerous grants that address either production issues in aquaculture, or processing and marketing of these products.  He initiated the first focused education program, sponsored by the New Jersey Department of Labor, for commercial fishermen to learn the basics of aquaculture.  He was the initiator of the formation of the New Jersey Aquaculture Association and is one of the original founders of the East Coast Shellfish Growers Association.

Flimlin has published numerous factsheets and bulletins related to aquaculture, mainly for shellfish culture and ornamental aquatic plants, and has organized and moderated more than 10 special sessions for annual meetings of the National Shellfisheries Association, the World Aquaculture Society, and the International Conference on Shellfish Restoration.  He served on the Executive Committee of the National Shellfisheries Association. He has also been on the Board of the US Aquaculture Society and recently was the President of that organization which provided a seat on the Board of the World Aquaculture Society.

Flimlin maintains an annual listing of East Coast Shellfish Nurseries and Hatcheries and has taught over 80 class sessions on aquaculture topics. Present research includes work on High Hydrostatic Pressure processing of hard clams. He worked with three other longtime shellfish people to develop the Best Management Practices program for ECSGA, and helped form a hard-clam growers’ cooperative in NJ.

In 2003 he initiated the Barnegat Bay Shellfish Restoration Program, which has trained over 250 volunteers and grown several million clam seed and hundreds of thousands of oyster seed to field-plantable size.  This program has been followed in numerous media outlets, educated thousands, spawned a public art and science education program called The Clam Trail, and won several awards. It uses shellfish to teach citizens to change their behaviors in the watersheds so as not to impact the coastal bays.

With a BS degree in Biology from St Peter's College in Jersey City, N.J., and a MS degree from the CW Post Center of Long Island University, Flimlin was employed by Rutgers Cooperative Extension (RCE) in Ocean County, N.J. He currently resides in Belfast, Me., having retired in January of 2017.